Your Rhythm, Your Life

YOUR RHYTHM, YOUR LIFE:
Pulse Tools for the Total Musician

Frame drummers, instrumentalists and vocalists are welcome to join this special guided process of discovery into the
inner world of flowing time and creative collaboration.

Glen and Loire's innovative approach uses stepping, gesture and rhythm vocals as the basic tools for exploring pulse flow and time awareness. We then apply this knowledge to our instruments or voice in coached ensemble settings. Drums and shakers - essential shamanic instruments - help guide our sonic adventures. (Glen Velez Signature Series drums and shakers will be provided.)

Eugene Friesen, author of “Improvisation for Classical Musicians,” is known for catalyzing improvisation in group settings.
Participants in “Your Rhythm, Your Life” will apply new-found rhythmic skills in ensemble settings that encourage
free play, listening, responding and discussion.

Topics will include:
▪ The impact of body movement and spatial awareness on our feeling for pulse, steadiness and the pure pleasure of rhythm

▪ How our inner organs generate sound and pulse

▪ How rhythmic vocalizing changes our perceptions

▪ The role of language in our pulse explorations

▪ Sacred Motif in Improvisation - using pulse to guide your improvisation


Acknowledging the importance of context and environment in discovering the inner voice of every musician, Your Rhythm, Your Life will take place in the ambience of the Stone Church in Bellows Falls, Vermont, a sonic and aesthetic setting that coaxes new sounds and ideas from even experienced performers.

Classes, meals and performances will take place at the Stone Church. The church campus includes the Immanuel Retreat Center, air-conditioned accommodations and classrooms. The sanctuary is a magnificent space with warm acoustics and 9-foot Steinway grand piano. 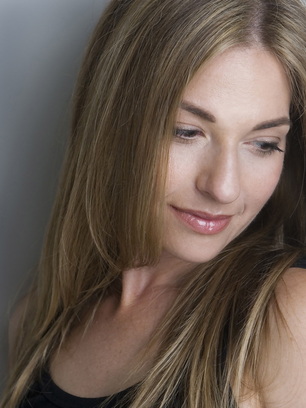 Loire Cotler has garnered an international reputation as one of the most captivating performers of our time. Using exotic rhythms as her muse, she executes with the human voice phrases that do not seem possible in their rhythmic speed and clarity. Loire's emotionally-charged melodic inventions and evocative percussion-driven interpretations of jazz standards and original compositions are informed by raw melismatic improvisations, jazz-scat and pop stylings, along with lightning-fast South Indian drum language.

After earning a Bachelor of Music from Berklee College of Music, followed by a Master’s degree in Music Therapy from New York University, she became a professor of Music Therapy and Voice at the New School (2001-2006) and worked extensively in the clinical field. In addition to conducting regular master classes at The Juilliard School in New York City, LOIRE's unique teaching method is being embraced at prestigious conservatories and universities throughout the world. She has performed in Taiwan, Mexico, Israel, Brazil, and throughout Europe and the United States. Her live performances have been broadcast on Spanish National Radio 4, German Public Radio, Italian National Radio 3, Radio Freistadt (Austria), DRS (Swiss-German national radio), WNYC and National Public Radio in the US.

Loire is a core member of TA KA DI MI project led by Grammy-winning master percussionist and composer Glen Velez.  She has been receiving rave reviews for her leading role as anchorwoman in the THE NEWS: a reality opera composed by the renowned avant-pop Dutch composer JacobTV. In September 2013 she will be performing a 'Peace' edition of THE NEWS in Rotterdam for the new King of Holland and will be on tour with the Nationale ReisOpera company in 2013-14. LOIRE's signature vocal style can be heard on a wide variety of recordings, film scores, television commercials and CD collaborations with world-class musicians and composers. She is currently in the studio recording her first solo album LOIRE: a voice unchained, to be released in 2018. For more info, visit: www.loricotler.com 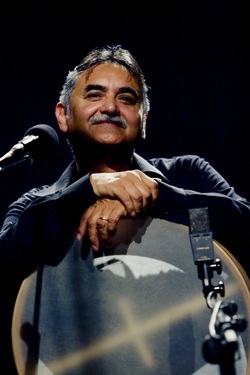 "A galaxy of timbres and inflections ... remarkable rhythmic fireworks" (The New York Times).

A four-time Grammy Award winner, Glen Velez is the founding father of the modern Frame Drum movement and is regarded as a legendary figure among musicians and audiences world-wide. During his illustrious career, Velez has single-handedly popularized this ancient drum for the modern world. His virtuosic combinations of hand movements and finger techniques, along with his original compositional style - which incorporates stepping, drum language and Central Asian Overtone singing (split-tone singing) - has opened new possibilities for musicians around the globe.

Velez is the first percussionist to gain international recognition as a successful solo artist using frame drums. In 1989 Velez’s undeniable mastery caught the attention of twentieth century composer John Cage, who Composed a piece especially for him, titled 'Improvisation for One-Sided Drum with or without Jingles.' 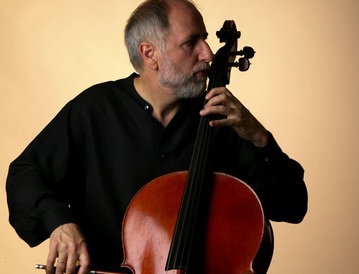 "Friesen uses the cello as a biting, crunching rhythm instrument." (The Miami Herald)

Eugene Friesen is active internationally as a cellist, composer, and teacher. A graduate of the Yale School of Music, he has been featured on recordings and in concerts all over the world with the multiple Grammy Award-winning Paul Winter Consort, with Trio Globo (Friesen, Howard Levy and Glen Velez), and in his popular CelloMan performances for children and families.

A pioneer in the teaching of improvisation to classically trained musicians, Eugene has led workshops throughout North America, Brazil and Europe. His book, Improvisation for Classically Trained Musicians (Berklee Press/Hal Leonard), was released in June of 2012.

Recent compositions include Glory, for choir, soloists and orchestra premiered at the Shenandoah Valley Bach Festival in June of ’12, Low 5’s premiered by the Rembrandt Chamber Players of Chicago, The Soul of the White Ant premiered by Los Angeles' Pacific Serenades in 2013.

He is an artist-in-residence at the Cathedral of St. John the Divine in New York City, and on the faculty of the Berklee College of Music in Boston.  More information on Eugene can be found online at: www.eugenefriesenmusic.com

(From the Boston Globe) "Overlooking the Connecticut River on the Vermont-New Hampshire border, Bellows Falls feels like a step back in time. Once one of the largest paper making centers in the world, the town is replete with grand homes built by titans of the pulp, paint, canal, and railroad companies that operated there more than a century ago. Most of its diminutive downtown - a cluster of red brick buildings, including a multistory clock tower above Town Hall - is listed in the National Register of Historic Places. Water has been the most valuable amenity in Bellows Falls, first making the area a prized Native American fishing spot (ancient Abenaki petroglyphs are carved in rocks by the riverbed), and later spurring the construction of mills, a bridge, and a canal system that turned the town into a hub of transportation and manufacturing. But Bellows Falls had a familiar post-industrial trajectory: By the mid-1900s most local industry had collapsed and the town fell on hard times. In more recent years, economic redevelopment and historic preservation efforts have injected new life into the community. Many of those gorgeous old homes have been restored, and a smattering of art galleries, modest restaurants, cute shops, and cozy inns makes Bellows Falls a quaint destination. "

Full tuition, including dinner each day, is $650. A nonrefundable deposit of $100 will reserve your space.
Info/registration: Please fill out the contact form below:
Click "Buy Now" to submit a $100 Workshop Deposit