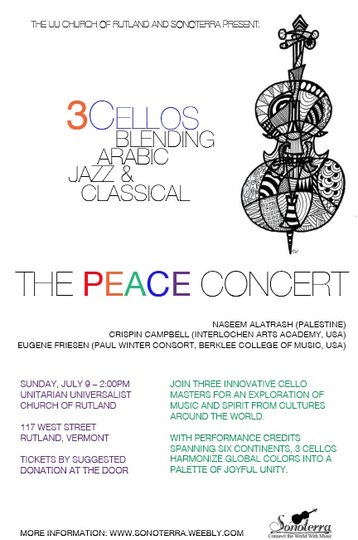 Tickets: by donation at the door


On Sunday, July 9th, at 2PM, the Unitarian Universalist Church of Rutland presents three innovative cello masters for an exploration of music and spirit from cultures around the world. With performance credits spanning six continents, “3 Cellos” integrate music from the Middle East, European classical music, and jazz into a melodic and rhythmic synthesis that honors both tradition and innovation.

Four-time Grammy winner Eugene Friesen is active internationally as a cellist, composer, conductor and teacher. He has worked and recorded with such diverse artists as Dave Brubeck, Toots Thielemans, Betty Buckley, Will Ackerman, Joe Lovano and Dream Theater, and has been featured in concerts all over the world with the Paul Winter Consort, with Trio Globo (Friesen, Howard Levy and Glen Velez), and in his popular CelloMan performances for children and families.


He is an artist-in-residence at the Cathedral of St. John the Divine in New York City, and on the faculty of the Berklee College of Music in Boston. More information on Eugene can be found at: www.eugenefriesenmusic.com

Acclaimed Palestinian cellist, Naseem Alatrash is a striking example of a unique musical voice from the Middle East. An accomplished classically trained musician and improviser in diverse styles, Alatrash has earned a reputation for blending Arabic, jazz, and classical music into his performances. After studying at the Edward Said National Conservatory of Music in Palestine, Alatrash was awarded a full scholarship to attend the Berklee College of Music in Boston where he achieved the highest honors for cello performance studying with Eugene Friesen, Owen Young, Rob Thomas, and Simon Shaheen.

Twice awarded “string player of the year” from The National Music Competition of Palestine, Naseem continues to be a voice for Palestinian culture and advocate of its music through his global string quartet The Four Corners Quartet.

Crispin Campbell, a 30-year faculty member at Interlochen Arts Academy in Michigan —considered one of the leading arts schools in the United States—is well known as a performer throughout North and South America. His musical style reflects his individuality. In a typical performance he makes seamless transitions from Bach to Zappa to Django, earning him the label: "A musician who defies categories."