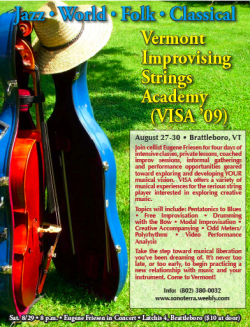 The Faculty Concert, Saturday, August 29 at 8 pm in the Latchis 4 theater, features triple Grammy award-winning cellist Eugene Friesen and Appalacian/bluegrass fiddler Andy Reiner in a program of original music heavily steeped in improvisation. Tickets are available at the door for a suggested donation of $10.

Eugene Friesen is a trail-blazer on the cello. His adventures playing with musicians from all over the world, plus jamming with poets, dancers and actors, have driven him to create original musical responses which transcend the traditional use of the cello. Doubling cello lines with his voice, lightning-fast double-handed plucking techniques, bold glissandi, and percussive bow work are hallmarks of his exciting and emotionally fulfilling live performances.

Faculty member Andy Reiner grew up in a musical family  in Lexington, Massachusetts.  He began playing at age 5, learning fiddle from his father (award-winning and Mel Bay published author Dave Reiner), as well as taking classical violin lessons.  Just when the young Andy was struggling with the issues of whether playing the fiddle was “cool,” attending Mark O’Connor’s Fiddle Camp in Tennessee in ’97 and ’98 changed his life forever.

In high school, Andy was privileged to participate in a renowned jazz program which helped to lay the groundwork of a future uninhibited by any kind of stylistic barrier. He entered and won many fiddle contests, most notably at the Lowell, MA Banjo and Fiddle Contests, where he has won 1st in Bluegrass Fiddle, 1st in Ethnic Fiddle, three 1sts in Twin Fiddle, and the Andy Wolf Award for Musical Excellence. A graduate of the Berklee College of Music, Andy performs as a soloist and with several groups.

A versatile musician and artist eager to explore new artistic medias, VISA student Marcelo Martinez Vieira is a cellist always in transit between different musical styles and diverse artistic activities. Raised in São Paulo, Brazil, Marcelo had an early musical initiation, at the age of five, in Piracicaba Music School, where he studied for several years with Monica Wolff and André Micheletti among others, and where he took part in several chamber, orchestral and vocal groups.

A graduate of Universidade de Campinas-Unicamp, where he studied with the great Greek-Brazilian cellist Dimos Goudaroulis, Marcelo played in the Experimental Repertoire Orchestra and several other  orchestras in São Paulo. He is now pursuing a Master's degree at Louisiana State University Music School, and living in Baton Rouge.

In Lee's music, classical roots support stylistic influences from American pop music, swing, jazz and world music. He may surprise you with a 16th-century dance tune from the courts of Europe, a jazz number with vocals, or one of his own songs from the heart.  He has performed from New York to Alaska in such diverse venues as Seattle's Bumbershoot festival, the O’Shaunessy theatre in Whitefish, the Symes Hotel, Firstnite Missoula and the New Directions Cello Festival in Connecticut.

VISA student Joel Cohen had his early musical training in the San Francisco Bay area with Irene Sharp and Margaret Rowell. After receiving his B.Mus. from the University of Western Ontario, further studies took him to Holland until his return to the San Francisco Bay area where he served as co-principal cellist with the Oakland Symphony from 1979 to 1985. Cohen lived in Vienna from 1985 to 1997 where he was a principal cellist of the Vienna Chamber Orchestra. During those years he also performed with the Vienna Radio Symphony (ORF/RSO), the Wiener Kammeroper, the Wiener Akademie (on period instruments), and Quartett Yggdrasil. He toured extensively throughout Europe and Asia with the Vienna Chamber Orchestra and the Johann Strauss Festival Orchestra of Vienna.

Since returning to the U.S. in 1997 he has been playing and teaching in the Boston area, performing with various orchestras and chamber music groups including the Boston Symphony Orchestra, Boston Pops Esplanade Orchestra, Masterworks Chorale, National Lyric Opera, the Chorus of Westerly, Rhode Island Philharmonic, and the Boston Landmarks Orchestra.

Joel is currently on the faculty of the College of the Holy Cross in Worcester, Massachusetts and the Lexington Music School in addition to maintaining a private studio. Since 2001 he has been involved with “New Directions,” an annual cello festival exploring non-classical cello styles through concerts and workshops. Joel also performs in the Boston area with "Improvelocity," a group which explores musical collaboration through spontaneous chamber music, creating works in various styles including jazz, fusion, soundscapes and world music.


Other student performers will include Tanja Bechtler, cellist with the Charlotte, NC, Symphony, and London-based cellist Ayanna Witter-Johnson.